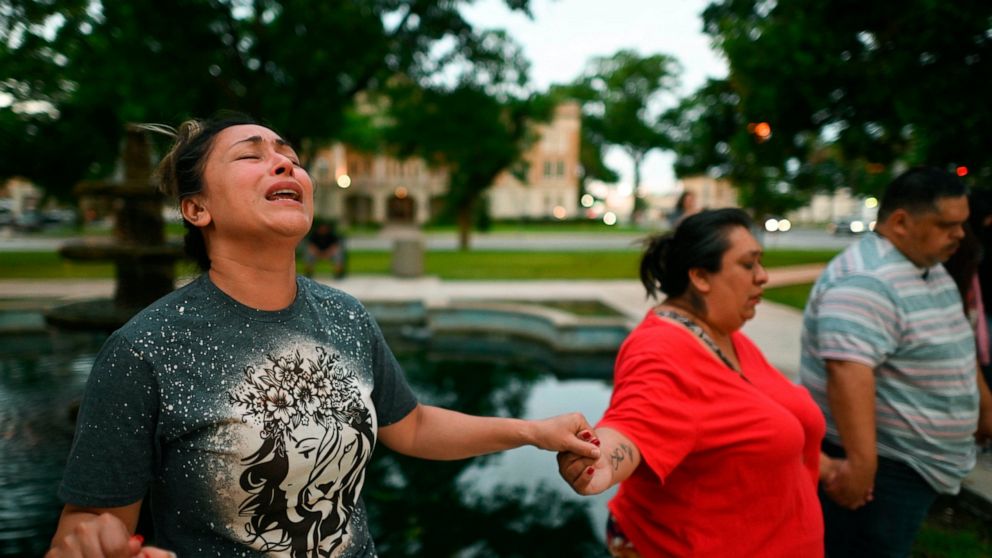 A horrific tragedy in Uvalde

For context: This story was originally spoken by Second Down’s Christian Goeckel at the start of Wednesday’s show

Sports talk radio is supposed to be your escape. I understand this completely. It’s a moment to decompress from the stresses and rigors of everyday life.

That being said, I have a responsibility to recognize when stories and events transcend the day to day of this program, or any other. When things happen that we cannot smile and willfully ignore.

Such an event happened yesterday in Uvalde, Texas. A town so small that if you type it into the message app on your iPhone it will appear as a misspelled word. Yesterday morning, an unfathomably disturbed 18-year-old shot and wounded his grandmother at her home. He then loaded 2 assault rifles into his truck and fled the scene before crashing near Robb Elementary School. The teenager got out of the truck, and with one of his rifles in tow, walked right through the doors of the building that contained 2nd, 3rd, and 4th graders. Children who were looking forward to summer vacations filled with trips, sleeping in, video games, water parks, and friends.

After walking through the doors to the school without any resistance, that teenager walked into a 4th grade classroom filled with children and proceeded to fire his rifle into the crowd of stunned confused students. Kids that had not yet seen their 10th birthday watched as their classmates and teacher were massacred in front of them before being targeted themselves.

That gunman would barricade himself in the classroom. The AP is reporting that one agent arrived on the scene first. That agent reportedly “rushed into the school without waiting for backup and shot and killed the gunman, who was behind a barricade, according to a law enforcement official speaking on condition of anonymity because he was not authorized to talk about it.” Again from the AP “The agent was wounded but able to walk out of the school, the law enforcement source said.”

Marsha (Catron) Espinosa, a Homeland Security Department spokesperson, tweeted on Tuesday. “U.S. Border Patrol Agents responded to a law enforcement request for assistance [for] an active shooter situation inside Robb Elementary School in Uvalde… Upon entering the building, Agents & other law enforcement officers faced gun fire from the subject, who was barricaded inside.”

“At least one Border Patrol Agent was wounded by the shooter during the exchange of gunfire. On-and-off duty Border Patrol Agents arrived on the scene to assist with transferring students safely to their families and providing medical support.”

I don’t want to ramble here and lose what’s important, but I am so devastatingly exhausted from learning the names of towns because of massacres. None of us in South Georgia should know the names of places like: Columbine, Sandy Hook, Parkland, Roseburg, and Uvalde. There are so many school shootings on Wikipedia that it reads like a sports stat page:

Again, I don’t want to ramble, so I’ll start with sympathies.

To the families, I pray for peace that I know will be a long time in arriving. What else can you do for them? Any legislation or change will ring hollow because it will always be too late. They will now be forced to face horror after horror. These people, while waiting to learn whether or not their child had been shot, were asked to provide DNA so investigators could potentially ID the corpses of the 4th graders that had been so mangled that they were unrecognizable. Just broken bodies. After that trauma, and the trauma of waiting, to the trauma of receiving the worst news anyone could, they faced the trauma of going home and seeing the empty beds that their babies once slept in. So I pray for peace and rest for their hearts.

To the children that survived, I hope you can move on. I hope the nightmares subside and you can find safety in your family. I also hope that as you get older you do not lose faith in us, though you have every right to. We have to be better, and for all of our sakes I pray we are.

To the families of the teachers that lost their lives, I hope you can take comfort in knowing that your loved ones were heroes long before yesterday. Teaching is a thankless job that only a person filled with selflessness can take. Their impact lives in every child that walked out of that school yesterday.

To the first responders that arrived on scene, thank you. We see everyday the stories about police officers hurting our citizens, and those stories should absolutely be brought out into the light and judged. But what we don’t see everyday is the horror that first responders see multiple times a day. Whether in the field or in investigations, the atrocities that you carry with you would bury most of us. To put it simply, someone had to carry out those dead babies yesterday and they’ll carry those images with them for the rest of their lives. I hope you can find support and a willing ear to talk to.

As for what we can change to prevent this, I don’t know what the right answer is. But I do know a few things:

If your first thought after you learned that 19 babies had been killed by a gunman was “They’re going to come after my guns.”, you need to evaluate your priorities.

In that same breath, if your first thought was “I can use this to further my message.”, you need to do some evaluating as well.

Again, I don’t know what the answer is, but one thing can’t get out of my mind: How does he just walk in there?

How does an individual just stride into a building that contains our most precious treasures? Our babies. How? Shouldn’t it be more difficult for a stranger to access the buildings that contain our children than for a fan to walk into a football stadium? I pass through more security walking into a pressbox than the shooter faced walking into that school.

Every school should be Ft. Knox. There is no denomination more important than the lives of our children. I think every person would agree that we would drive on dirt roads if it meant that money was being put towards our children’s security. Keep your damn roundabouts, protect our kids.