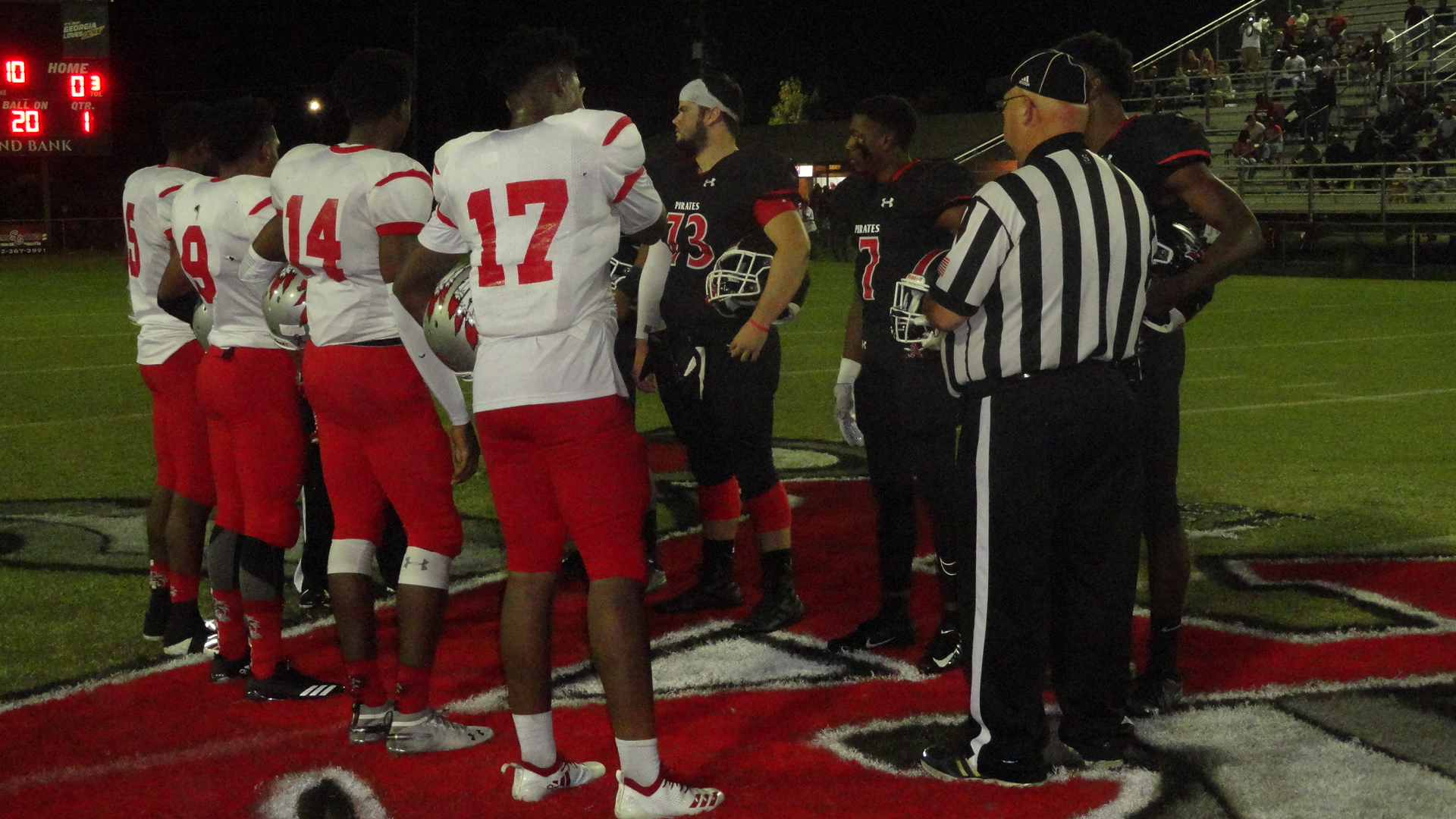 Baxley, Georgia – Savannah (Ga.) Jenkins (8-3/6-2) came into this first round matchup versus the Pirates as a 19-point underdog and left with a 29-22 hard fought victory. Marshall running back commit Jeremy Smith would pound in two scores while junior wide out Darius Bush hauled in a pair of touchdown passes to pace the Warriors offensively.

Things surely didn’t look good early on for the Warriors as Baxley (Ga.) Appling County (6-5/4-1) methodically marched 62 yards on the opening drive to take an early 8-0 lead. In the end the Jenkins defensive unit, led by senior linebacker Wayna Pringle, would limit the Pirates to just 132 yards rushing on 36 carries the rest of the game.

Appling County the #2-Seed from Region 2-AAA sees its season comes to a close. On the bright side it was the first winning season and playoff appearance for the Pirates since 2014. Jenkins the #3-seed from Region 3-AAA  will now host a playoff game versus Zebulon (Ga.) Pike County (8-3/3-3).

Below are some of participants from this contest that displayed the size, athleticism and football acumen worthy of attention from college recruiters. Some of the standouts are not household names, but could be in the near future.

Though only eight players were chosen for this piece, 18 potential prospects were included in the XOSDigital Weekly report. This report is sent directly to 200-plus college coaching staffs, most of which are FBS or FCS. The bottom line is college coaches are the ones that need to embrace your skills, not fans.

Similar to Gray (Ga.) Jones County pass catcher Jontavis Robertson’s breakout performance last year in the playoffs, this may have been Bush’s breakthrough game. Coming into the contest he was leading the team with 21 receptions for 241 yards and three touchdowns. Last Friday night Bush’s talents were blatantly evident as he caught seven passes for 137 yards and two scores. No play was more impressive than his 18-yard TD-grab early in the fourth quarter. Bush was able to embarrass a defender with a mystical juke move near the goal line. Earlier on that same game winning drive he was able to snag a short pass and somehow sidestep defenders for a 38-yard gain. His top end speed is incredible and he could project as a slot or a vertical threat from the wide out position in college.

Jenkins has a plethora of good looking defensive prospects on the hoof, but Cash is definitely at the top of that list. He possesses excellent length, superior muscle structure and a frame that can easily house more muscle mass. Cash has very good closing speed and can be a serious threat coming off the edge in passing situations. Versus Appling County he recorded five tackles, two TFL’s and one sack while handling the punting duties. But make no mistake this young man is all linebacker and the only special teams he’ll be playing at the next level is covering kicks and punts. Cash has very good lateral movement and the hip rotation and footwork to drop in coverage.

Simmons is the other pass rushing specialist for the Warriors. He plays both traditional defensive end and outside linebacker. He is long ,lean and possesses superior closing speed. This guy can chase plays all over the field while also wreaking havoc in the backfield. Friday night he accounted for seven tackles and one TFL. Right now he is a bit lean, but his frame will easily accommodate another 30 pounds of muscle mass. Look for him to be recruited as either a 3-4 outside backer or a rush end in a four man front. The tandem of Simmons and Cash are a deadly duo and a big reason why the Warriors are rendering just 10 points a contest through 11 games. On the recruiting front Simmons is already attracting major attention and currently holds an offer from Tennessee State.

This multipurpose athlete came into the contest as the team’s leading rusher and finished this game somewhere around the 100 yard barrier with two touchdowns on 19 carries. On the first scoring drive of the game he bounced outside for gains of nine and 19 yards, flashing good speed. Then late in the fourth quarter while trying to  kill precious clock Smith was able to carry tacklers for gains of 12 and ten yards. His rushing total would have been greater but he was credited with a couple losses on the last possession when the Warriors were simply running out the clock. Smith also played some corner in the contest, a position some colleges’ coveted skills at. Right now he is committed to Marshall as a running back, one with serious ball skills and deadly in space.

I usually don’t get too excited about players during warm-ups, but watching this defensive lineman run routes and catch balls was a slack jaw experience. For a while I’ve thought his eventual position may end up as a defensive tackle once he fills out and that is still a possibility. But this jumbo athlete could also project as an H-Back at the next level as well as a defensive end. Stone recorded five tackles, two QBH’s and one TFL while catching a two-point conversion. He is quick off the snap and uses his hands like weapons to bypass pass blockers. Though he currently does not hold any offers his skillset and production make him a legitimate FCS/FBS prospect. Stone currently leads the Warriors in tackles for loss on the season.

This young tailback definitely looks the part, he possesses the frame to easily play at over 200-pounds one day. This past Friday Roberts toted the rock 14 times for 77 yards. He appeared to get stronger as the contest  progressed doing most of his damage late in the third quarter on the Pirates final scoring drive. Roberts was at his best when he bounced outside and raced it down the sideline. It couldn’t have felt great tackling this racing freight train. Nearly 70% of his rushing total for the season (657) has come in the last four games. If Roberts continues to hone his skills while working on becoming an offensive aggressor, he could find himself being recruited by FCS and FBS schools as an every down back.

It seems like I say this every other week, but this young man is possibly the best looking defensive skilled position player I’ve seen this season. Sanders has tremendous length with long arms, a narrow waist and the long quick-twitch legs of a track star. In the game he recorded three tackles, one INT, one FF and scored a two-point conversion. Sanders could project as a strong safety or even grow into an outside linebacker. He demonstrated excellent closing speed and has incredible leaping ability. Unfortunately Sanders will not meet NCAA academic requirements and will have to take the JUCO route. I implore any college coach to watch his film on hudl, Sanders can run and strikes like a ball of fury. My friend and co-worker Calvin Wilson of the Explosive Recruiting Show gave me the tip to keep an eye out for Sanders and he was spot on about his abilities.

Doing research for this first round matchup I found a young athlete that leads his team in all-purpose yards through ten games despite less than 30 touches. What does that mean, well it means someone is not only extremely fast but deadly in space. Walker was unable to get untracked offensively against Jenkins but he did manage a 22-yard touchdown catch and returned two kickoffs for 90 yards. He also added two tackles from his corner position. Walker possesses decent size for a young skilled position player and could project on either side of the ball. He has fluid hips and once he sticks his foot in the ground expect a serious change of gear to take place. Walker does attack the ball with his hands so right now I would lean towards him ending up on the offensive side of the ball as well as being used in the return game.