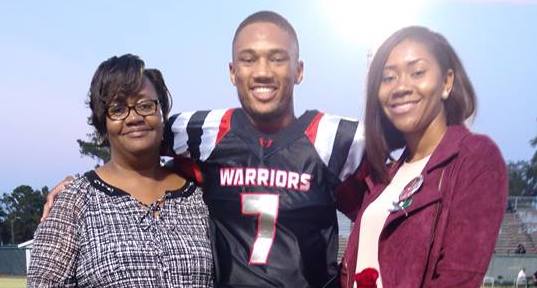 On National Signing Day, Middleton, true to his convictions, signed with The Citadel. Football is only part of his potential.

Javonte Middleton has always seen the big picture. As a quarterback for H.V. Jenkins, he helped the Warriors win their first region championship since 1966, then go back-to-back while also going undefeated for the first time in school history. As a young leader in the community, Middleton has been a constant in civic engagements. The notion of being a true student-athlete is one that he has long taken seriously, also embracing the responsibility that football sometimes brings.

On National Signing Day, Middleton, true to his convictions, signed with The Citadel. Football is only part of his potential.

What Middleton did on the field was historic. During his four-year career, Jenkins won 34 games, setting a school mark with ten wins in 2016, then resetting that record with 12 victories in 2017. The two most-productive seasons, ever, for the Warriors were Middleton’s upperclassman runs: 33.6 points per game after 35.3 the year prior. Jenkins peaked inside the state top five this past fall, with Middleton winning the Michael Finocchiaro Memorial Outstanding Football Player Award given to Savannah’s best player.

As an upperclassman, Middleton threw 28 touchdown passes and ran for 22 more, pacing a newfound contender as a dynamic team leader. That accountability and ambition has followed Middleton like a shadow. From reading to children at local elementary schools to speaking at various municipal events, Middleton, the prized quarterback recruit, has often been Javonte the volunteer. He has both stood out and blended in, like a true captain often does.

Middleton has a profile that fits the platform, one that he has prepared for quite some time. Above all else, The Citadel is getting a prospect and a person ready for the next-level.

“They expect me to lead. I wanted to go to a program that trusted me as a leader just as much as a football player,” Middleton explained of joining the Bulldogs. “They want me to play quarterback. I believe being a team player is more important than scoring touchdowns.”

For the entire story, head to Southern Pigskin.