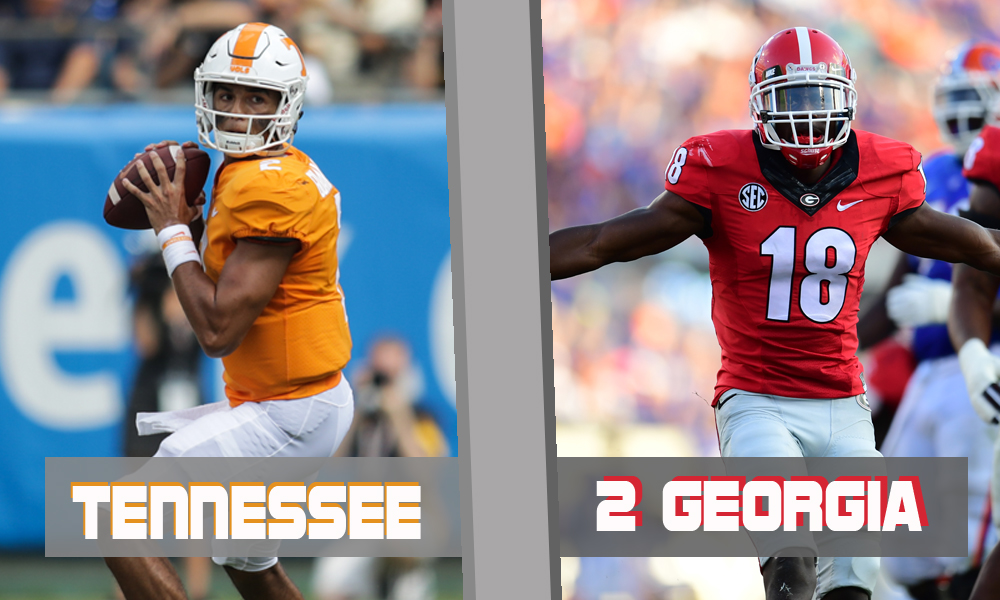 Series History: Tennessee leads the all-time series (23-22-2), but Georgia has dominated the recent history. The Dawgs are 7-3 in the past ten matchups.

In last season’s matchup, Georgia handed Tennessee it’s worst home loss since 1905 in the 41-0 drubbing. It was also the worst loss in the series for either team since Georgia beat the Vols 44-0 in 1981.

In Athens: Tennessee has fared pretty well in Athens, sitting at 11-11-1 when playing in Sanford. Kirby Smart and all of Dawg Nation will remember the last time the Vols came to Athens.

Jacob Eason (now at Washington) seemingly etched himself in Georgia history with his desperation bomb to Riley Ridley to give Georgia a 31-28 lead with 10 seconds left in the game. After a couple of bone-headed Georgia penalties, Tennessee found itself on Georgia’s 43 yard line. In a play now referred to as the “DobbNail Boot” by Tennessee fans, Josh Dobbs connected with Jauan Jennings surrounded by defenders for the walk-off hail mary.

The Hail Mary that won the game for #Tennessee!! #TENNvsUGA pic.twitter.com/PPB9rhYPOz

You think that play might be on every tv in Georgia’s weightroom all week?

Offense – Keller Chryst: The redshirt senior quarterback will be on alert Saturday. Tennessee’s starter, Jarrett Guarantano, was knocked out of  the Volunteers last game, against Florida, with a lower leg injury. If Guarantano can’t go or is limited, the Vols will have to look to Chryst. In his limited time against Florida, Chryst completed 3-7 passes for 44 yards.

Defense – Emmit Gooden: Missouri was able to shut down Georgia’s inside run game, and Middle Tennessee State was able to get pressure on Fromm in their respective game. With Georgia likely down 2 starting offensive lineman, Gooden could be in for a big from his interior line spot. The junior from Brownsville, Tenn leads the Volunteers in tackles for loss. If Tennessee is going to pull off the upset, Gooden and Tennessee’s front 7 will have to play near perfectly for four quarters.

Offense – Justin Shaffer: Cade Mays has filled in well for Andrew Thomas at LT. Now it’s time to see if sophomore guard Justin Shaffer can step up the same way for injured Ben Cleveland. At 6’4, 330 pounds, Georgia won’t lose too much size at the spot, but does the sophomore have enough experience to go all four quarters? Shaffer seemed up to the task in Missouri, and if he struggles, Coach Smart and Pittman have plenty of other blue-chippers ready to go.

Defense – Tyson Campbell: The freshman phenom scored his first career touchdown Saturday at Mizzou. He was also forced to leave the game with a shoulder injury, and then again for dehydration and vomiting. With Deandre Baker having an All-American campaign on one side of the secondary, teams will attack Campbell more and more. The freshman has done well so far, and will be a crucial part of Georgia’s attempt to shut Tennessee out for the second year in a row.

Tennessee wins if: They establish a run game. Even with Guarantano healthy, the Volunteers struggle to throw the ball. To pull the upset in this one, the defense will have to stone Georgia at the line, and get the ball back to the offense. If Tennessee can play ball-control and get this one to the fourth quarter close, they’ll have a shot.

Georgia wins if: They execute. Georgia hasn’t executed for a full 4 quarters yet.

Austin Peay and Middle Tennessee State were both over by half, but still had mistakes.

South Carolina was a battle for the first two quarters, with Georgia’s offense struggling to find itself until a perfect 3rd quarter.

Missouri just wouldn’t go away. The Dawgs couldn’t get out of their own way on defense and allowed Missouri to crawl back in everytime it seemed Georgia had put them away.

This is a crucial game for Georgia, they must begin to establish who they are now. You don’t want to go into Death Valley with question marks in a few weeks.

The Dawgs finally get a night game after 4 scorchers. Expect the atmosphere in Athens to be rocking for this SEC East tilt.