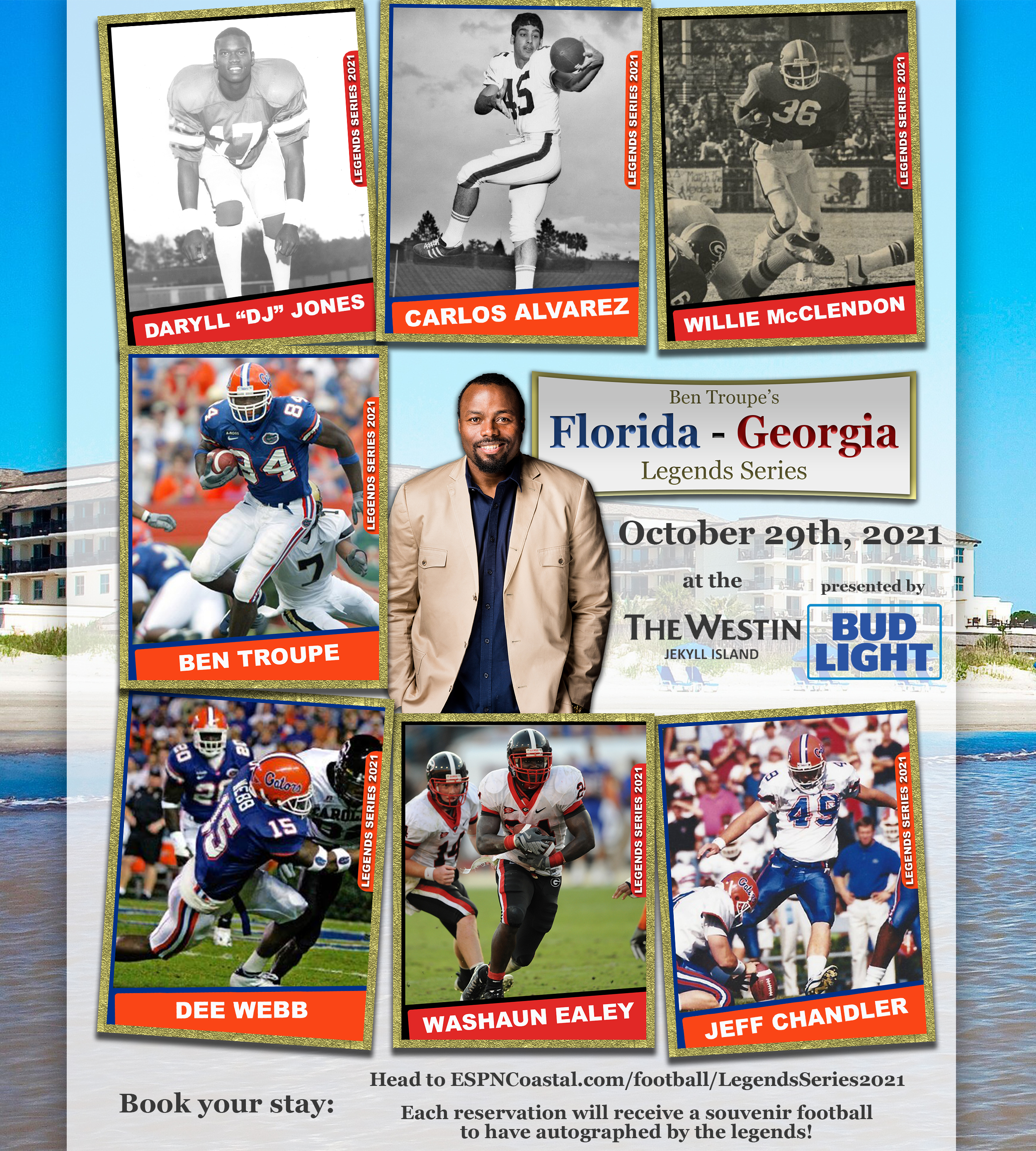 JEKYLL ISLAND — The 3rd-annual “Ben Troupe Florida-Georgia Legends Series”, presented by Bud Light, will be held on Friday October 29th at the Westin Jekyll Island. Troupe, a Florida-Georgia Hall of Famer, will host a roundtable with former Bulldog and Gator greats on the seaside patio starting at 7pm. ESPN Coastal will broadcast “Second Down” from 2-3pm and “Three & Out” from 3-6pm live on location on both Thursday and Friday afternoons.
To book your stay at the Westin Jekyll Island for the weekend click here
Troupe played for Florida from 2000-2003. He earned first-team All-American honors his senior season and was a finalist for the Mackey Award, given to the nation’s top tight end. As a junior, Troupe caught the game-winning fourth quarter touchdown pass in the Gators’ 20-13 win over Georgia. As a senior, his late 20-yard catch on Florida’s final drive helped set up a game-winning field goal in a 16-13 victory. The first pick of the Tennessee Titans in the 2004 NFL Draft, Troupe was selected 40th overall and played five professional seasons with Tennessee, the Tampa Bay Buccaneers and Oakland Raiders.

Troupe is now an afternoon radio co-host on “Three & Out” with Kevin Thomas and B.J. Bennett on ESPN Radio Coastal, with stations in Savannah, Brunswick and Waycross, and streaming at ESPNCoastal.com. He travels around the country as a motivational speaker. Recently, Troupe published “Uncommon and Unfinished: The Ben Troupe Story” with Bennett, available anywhere books are sold online.

Ealey, the second-leading rusher in Georgia high school history, ran for 1,528 yards and 14 touchdowns at Georgia and was second in the SEC East with eleven scores in 2010. A member of the Bulldogs’ 1980 national championship team, Jones played quarterback, defensive back and return specialist for Georgia, recording five interceptions in his two upperclassman seasons. McClendon, a Florida-Georgia Hall of Famer, All-American and the 1978 SEC Player of the Year, rushed for a then-school record 2,228 yards and 22 scores for the Bulldogs, including 1,312 yards and 13 touchdowns in 1978.

Located at 110 Ocean Way, the Westin Jekyll Island is a four-star hotel nestled beachside, conveniently next to prime shopping and dining. The Westin offers a unique mix of cutting-edge amenities with classic local charm. Enjoy intimate access to the area’s top attractions, including the Jekyll Island Convention Center, Driftwood Beach and more

Enjoy the GA FL Game Weekend at the Beach. Start your weekend at the live ESPN Radio broadcast from The Westin Friday 2-6pm.  Afterwards, join us for The Legend Series roundtable, hosted by former Hall of Famer Ben Troupe, where former competitors will share memories and stories from their experiences.  Guests will receive a souvenir football for signatures at the player meet and greet Friday, and 2 drink vouchers daily.  Saturday, watch the game on TV poolside or at The Reserve Steakhouse lounge.  To book change the calendar dates to your preferred arrival date between Thursday October 28 and Saturday October 30, 2021. Click here to book