Lamar Jackson is a First Round Quarterback

Under the bright lights of Indy, regardless of what any critic or measurement may have said, Lamar Jackson stood tall.

The pre-draft talking points surrounding Lamar Jackson have included a number of questions that simply don’t need to be asked as they have long, already, been answered. Can he be a franchise quarterback? How does Jackson compare to this year’s other top quarterbacks? Should he work out at wide receiver? Jackson has handled the hyperbole like a true professional, avoiding the controversey and staying nothing but committed to his craft.

While other signal callers continue to be praised for their athleticism at an NFL Combine event designed to display it, Jackson, in some ways, has had to hide his. The 2016 Heisman Trophy winner even decided not to run the 40-yard dash, likely in an attempt to limit talk about his speed. Forget laser-timed, Jackson has been laser-focused. His goals have not once changed. Formerly a college player so dynamic that he became a relative victim of his own successes, Jackson now has to prove who he is in favor of what else he could possibly be.

Setting aside Jackson’s versatility, which is an asset, mind you, his productivity through the air compares favorably to the vast majority of his positional peers. Consistently in the starting lineup throughout his career as a multi-year starter, Jackson, the passer alone, still stands out as a prospect.

Of the 12 power five quarterbacks in Indianapolis, Jackson, Baker Mayfield and Mason Rudolph are the only three to have posted at least a 3-to-1 touchdown-to-interception ratio with at least 8.5 yards per attempt over the last two seasons. During that span, Louisville faced nine top 25 defenses, while Oklahoma and Oklahoma State played a total of nine such units, including TCU twice for the Sooners in 2017. 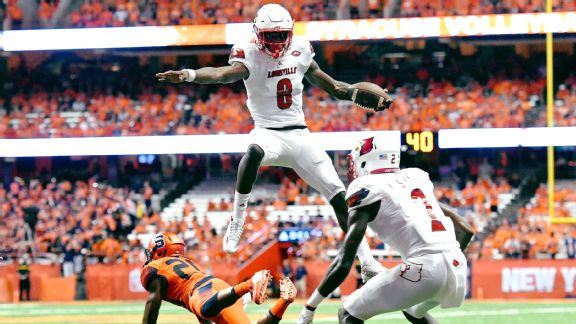 Simply for point of reference, Jackson rushed for more yards last October than Mayfield and Rudolph did over the past two years combined. In fact, though it’s become blaspemy to bring it up, you can take away Jackson’s single game career high of 226 yards and he would still have more career rushing yards than combine star Saquon Barkley, a three-time 1,000-yard rusher at Penn State. Jackson was one of the nation’s most accomplished quarterbacks, all while carrying the load of an All-American tailback.

Jackson isn’t perfect, but neither is any prospect at any position. Fact is, he is an incredibly-talented young quarterback with the attitude and abilities to improve a team at the next level. Playing in a complex offensive system of a former NFL head coach in Bobby Petrino, Jackson consistently pushed the football downfield and did so against some of the best defenses in the country. Though almost cast as a negative at the combine, his legs are more likely to move him away from oncoming defenders than towards them.

It’s impossible to know all that lies ahead or predict the future, but this opportunity, one to lead a professional franchise, is one that Jackson has undoubtedly earned. Under the bright lights of Indy, regardless of what any critic or measurement may have said, he stood tall.

Clearly, Jackson is worthy of a first round pick, potential and promise he has shown time and time again.