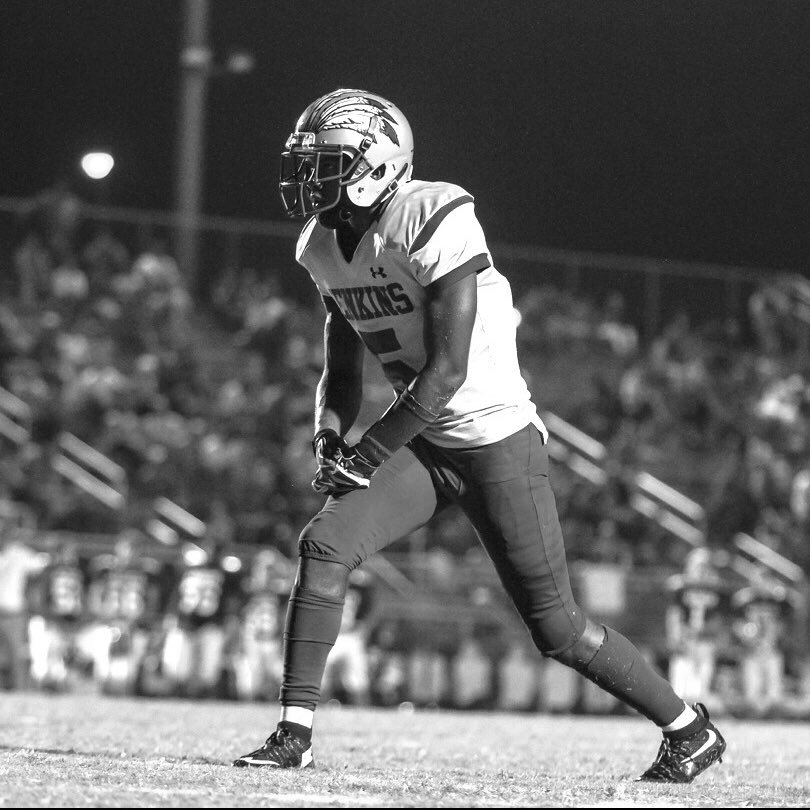 As a junior Smith caught 20 passes for 315 yards and one score, he also carried the ball 25 times for 177 yards and three touchdowns.

First year head coach Jason Cameron made a huge splash in his inaugural season at the helm of Savannah (Ga.) Jenkins Football Squad. The Warriors finished the season (12-1/7-0) earning their first undefeated regular season in school history. It was also the deepest playoff run by Jenkins since 1966. His accomplishment did not go unnoticed being named the All-Greater Savannah Coach of the Year by the Savannah Morning News.

Looking forward to the 2018 football season the Warriors will be without offensive standouts Javonte Middleton, Tyrone Scott and Ameen Stevens. Each was selected to the All-Greater Savannah First Team Offense.

One player Cameron will be counting to fill the void is 6-foot, 185-pound athlete Jeremy Smith, affectionately known as “Jerm” to his teammates. As a junior Smith caught 20 passes for 315 yards and one score, he also carried the ball 25 times for 177 yards and three touchdowns.

“Smith is a very versatile athlete that played wide receiver this past season and he’ll be counted on as our feature back next year,” Cameron said. “He is a popular kid with a great mom who is really involved with the football program. The sky’s the limit for this young man considering the way he is built and his ability to be an impact player on the football field.”

Currently Smith holds one offer from Mercer and is hearing from Army, Central Michigan, Cincinnati, Coastal Carolina and South Carolina.

“We will be flooded with college coaches checking him out,” Cameron said. “Several big schools have asked whether he can play corner because they like his length, ball skills and top end speed. Well, he will be getting some reps next season either at corner or safety on top of his running back duties.”

One thing college coaches will not have to worry about is his academics. Smith knocked it out of the park on his first take of the ACT hitting a 25.

“I’m going to have to be a leader for our upcoming juniors..”

When not working with his Warrior teammates, Smith takes part on the Explosive Sports Greed-D-Boyz 7-on-7 traveling squad where he gets work at running back and slot receiver. He is also a standout on the Jenkins Track Team taking part in the 100-meters, 200-meters, long jump and high jump.

“I already know I will be playing some defensive back next year and that college coaches have asked whether I am willing to do that at the next level,” Smith said. “I am at my best using my vertical speed and getting to the outside, but I can always improve my pad level and footwork. But the bottom line is; I will play anywhere in order to get on the field.”

This upcoming season will be pivotal to Smith’s recruiting. It won’t be an easy task as Jenkins clearly has a bullseye on their back. The Warriors have not lost a region game since October, 23 of 2015; in fact that is their lone region loss in the past three years going an impressive (19-1).

“I’m going to have to be a leader for our upcoming juniors and show them how to do the right things on and off the field,’ Smith said.  “We have to listen to the coaches and do exactly what they say. I’ll have to continually push my teammates and keep them motivated if we want to continue our success.”

One thing we all noticed about Smith at the ESPFC football camp held at the Pooler Sports Complex was his competitive nature. No running back proved to be a more natural pass catcher than this young man. Whether he plays running back, receiver or defensive back in college no one can question his electrifying speed and superior body control.

This is one “Jerm” that opposing players will have a hard time catching in 2018.