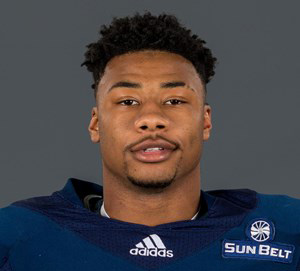 The expectation is that the Eagles will be dramatically improved on offense this fall and the expanding role of Wesley Kennedy is a big reason why.

Simply put, there aren’t many players anywhere in college football with a resume quite like Wesley Kennedy III’s. A rising sophomore slot-back for Georgia Southern, he is poised to burst onto the national scene this fall. Kennedy, even now, has a list of achievements that come with a paperclip. There is very little he can’t do or hasn’t done. The talent is undeniably there for the versatile speedster; so, too, is the timing.

Kennedy, in limited action a season ago, showcased a rare ability to make an impact, see his 77-yard dash against Louisiana. Playing in ten games as a true freshman, Kennedy averaged 13.5 yards per rush, 15.7 yards per punt return and 35 yards per kickoff return. A team-first talent, he was all over the field this past year, first registering in the box score with a special teams tackle at Indiana, later even attempting a pass at Appalachian State. Kennedy has a multi-faceted set of skills, a playmaking potential both pundits and peers know all about.

A Savannah-native, Kennedy played high school football for state superpower Benedictine, there suiting up for former Georgia Southern defender Danny Britt. Even at a place where countless players have gone on to next-level success, all that Kennedy did had never been done before. First and foremost, he won at an unprecedented level; Kennedy went a remarkable 53-4 over his four-year career, claiming state championships in 2014 and 2016. He and linebacker Chris Harris, Jr. signed with the Eagles following a perfect 15-0 season.

In terms of production, few prep players in the country were more active than Kennedy. For his career, the hybrid dynamo topped 7,500 all-purpose yards and scored 89 total touchdowns. As a senior, alone, Kennedy rushed for 1,236 yards at 10.7 yards per carry and compiled 895 receiving yards at 21.3 yards per catch. He was at his best in the state final, scoring on offense and defense alike. Kennedy finished with 2,867 all-purpose yards and 37 touchdowns, earning GHSA AA Offensive Player of the Year honors and all-state recognition.

On Georgia Southern’s recently-released post-spring depth chart, Kennedy is listed as the first-team slot, or H.  Regardless of where he lines up, Kennedy is poised to be the x-factor on an experienced unit that returns starting quarterback Shai Werts and veteran running back Wesley Fields. The expectation is that the Eagles will be dramatically improved on offense this fall and the expanding role of Kennedy is a big reason why. Look for offensive coordinator Bob DeBesse to find a number of different ways to get Kennedy involved.

After a noteworthy set of spring practices, Kennedy led all Georgia Southern receivers with eight receptions for 66 yards in a modified spring game. Consider the performance a sign of things to come.

Kennedy is an elite prospect from right in the Eagles’ own backyard, a high school star some have said is the best they have ever seen. Though Kennedy is already a well-known talent locally, he is primed and ready for a breakout year. The Sun Belt, and college football in general, should be anticipating a formal introduction.