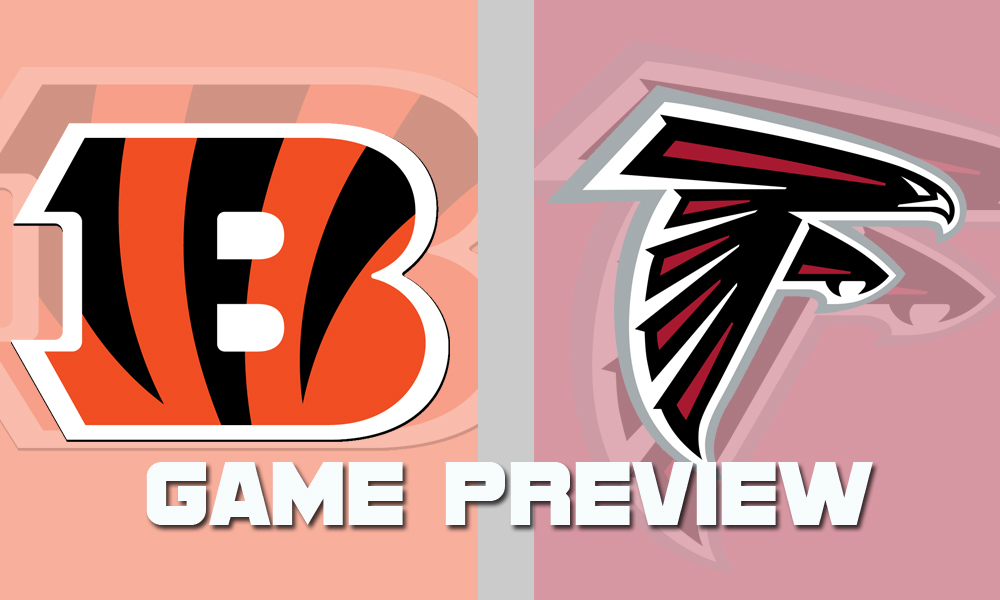 Series History: Although Atlanta and Cincinnati have only met thirteen times (Cincinnati leads 8-5) the matchup never fails to make the game interesting. Their most recent game was back in 2014, around this same time of year, when Mohamed Sanu was still apart of the Bengals organization. The Bengals cruised to a win that day at home, 24 – 10 with the Falcons mostly unable to shut down the run. They gave up two goalline touchdown runs to Giovani Bernard and Jeremy Hill, and then a 76 yard receiving touchdown by none-other than Sanu himself.

Atlanta: Despite the shortage of meetings between these two teams, the series is tied at 3 – 3 when the Falcons are playing at home. The last home game, WAY back in October of 2010 when Chad Ochocinco and Terrell Owens were taking passes from Carson Palmer. The Falcons came out with the ‘W’ with a score of  39 – 32. Roddy White went for 201 yards on 11 catches and two touchdowns, and the burner, Michael Turner with 121 yards on 23 carries and two rushing touchdowns, while simultaneously holding Cincinnati to only 84 total rushing yards. I’m sure both teams will continue to be an exciting matchup.

But 3 Touchdowns for Calvin Ridley this week 🔥🔥🔥 pic.twitter.com/PNDK7M1FcC

Offense – Tevin Coleman: The stand-in starting running back for the second straight week if Devonta Freeman still isn’t ready by Sunday, possibly needing extra time to continue nursing a knee injury. Coleman has gone for 159 yards on the ground and 58 yards in the air, combining for 217 total yards and two touchdowns this season so far. He produced 33 yards on 15 carries, and had two catches for 14 yards and a touchdown last week in the loss to New Orleans. However, Cincinnati struggled last week against the leading rushing offense, the Carolina Panther. Both Atlanta and Carolina have the strong offensive line to help clear a path for the back. I would closely compare Coleman with Christian McCaffrey in his ability to spread yards out through receiving and rushing rather than just strictly pounding the rock, and then say he may find success against Cincinnati this weekend.

Defense – Jordan Richards: One of the safeties stepping up big time now for Atlanta with the absence of Ricardo Allen, who tore his Achilles tendon last week against the Saints, and Keanu Neal, who is also out for the entire season with a torn ACL. In 2015, Richards, was drafted 64th overall in the second round, out of Stanford, by New England. He’s spent the last three season with the Patriots, accumulating 40 tackles, 2 forced fumbles, and 3 pass deflections in his tenure. Richards has 6 tackles on the season, and will have to work with the other members of the Atlanta secondary, some recently added like S Sharrod Neasman, LB Bruce Carter, and LB Richie Brown, to keep the Bengals reception-heavy offense at bay. According to Marvin Lewis, AJ Green will most likely be ready to go Sunday despite a lingering pelvis injury and being limited in practice this week.

Offense – AJ Green: Cincinnati’s 6’4 star reciever was drafted 4th overall in 2011 out of the University of Georgia, (GO DAWGS) the same year as Julio Jones. This will actually be the first time Green and Jones hit the field together, the most recent meeting Green was out battling hip or groin injuries similar to the one this week. He is in his 8th season and has amassed 16 receptions on 25 targets with 219 receiving yards and 4 touchdowns now through the third week. Not entirely impressed last game, compared to his 5 reception, 69 yards, and 3 touchdown game against Baltimore in week 2, while having 5 catches for 58 yards on only 8 attempts against Carolina. No matter the case, we can always expect great things from Green going forward.

Defense – Shawn Williams: A 6 year starting DB, Bulldog, and Georgia native was drafted in the 3rd round and 84th overall in 2013. Already accruing fifteen tackles, one sack, one interception, and a forced fumble this season, Williams will be looking to be a huge factor in this game. Dre Kirkpatrick will be tasked with covering Julio Jones, and i’m more than sure Williams will be responsible for helping double Jones, or possibly assisting in coverage over top against another reciever.

The game kicks off at 1pm ET on Sunday. It’s going to come down to Defense once again this week. Should be a beautiful day in Atlanta and at the Mercedes-Benz Stadium. Will Calvin Ridley match his incredible performance from last week, or Green with his from week 2? With Joe Mixon out again, will Giovani Bernard and the Bengals O-Line be able to establish the run? Sunday will be here soon enough.