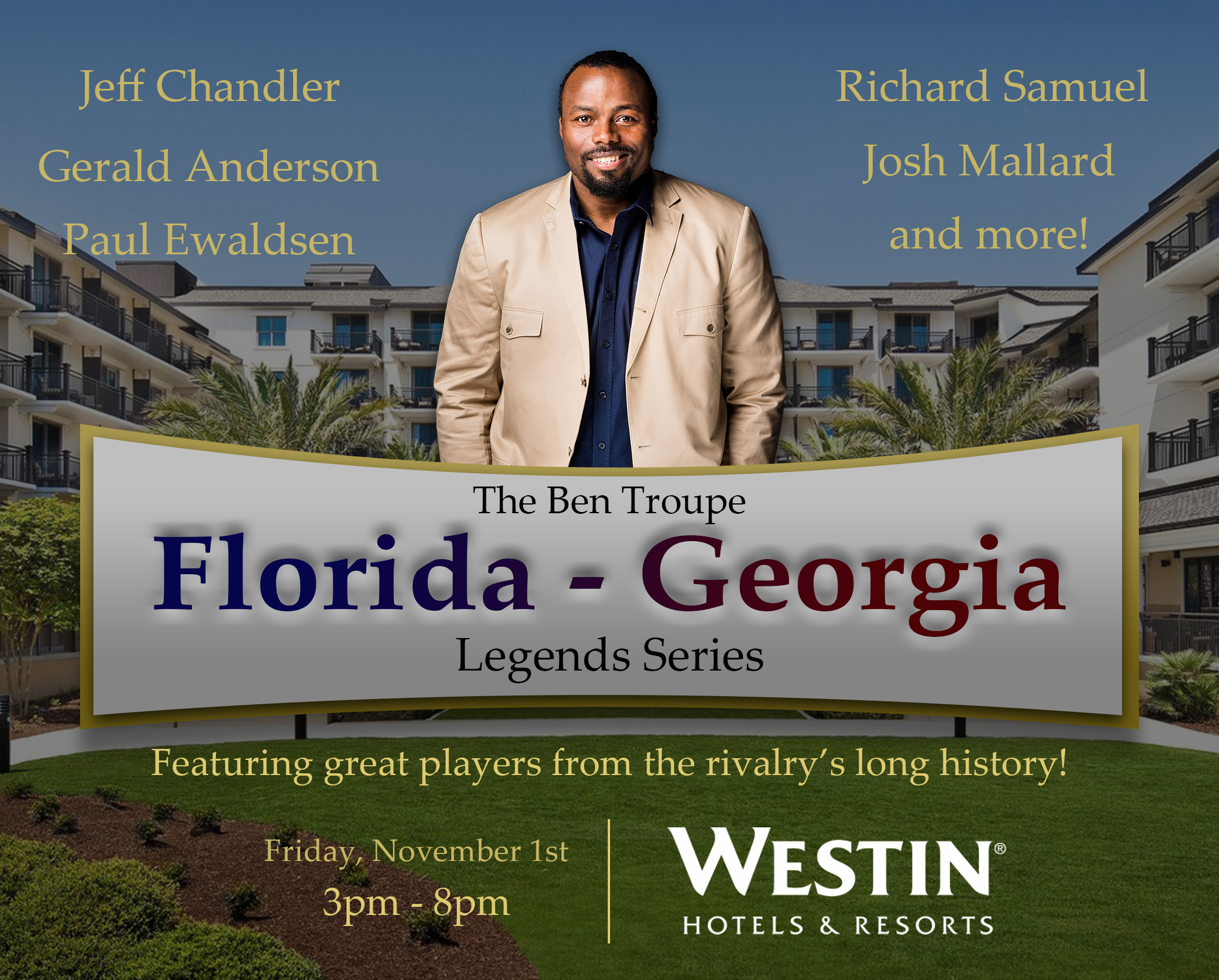 Jekyll Island, Ga — The inaugural “Ben Troupe Florida-Georgia Legend Series” will be held on Friday, November 1st at the Westin Jekyll Island. Set for the night before the Florida-Georgia game in Jacksonville, with the upcoming contest soon to be the 98th meeting between the two programs all-time, Troupe’s multi-faceted event will welcome a number of former Gator and Bulldog standouts to the Golden Isles to reflect on one of the great rivalries in college football history.

Following a game-centric, interview-heavy live broadcast on site from 2-6pm ET on Troupe’s afternoon sports radio show “Three & Out“, which airs on ESPN Radio Coastal Georgia, ESPN Radio Savannah/Hilton Head and ESPN Radio Waycross/Blackshear, and can be streamed online at ESPNCoastal.com or via the ESPN app, the Florida-Georgia Hall of Famer will host a public players-only roundtable where former competitors will share memories and stories from their experiences.

Troupe, who played tight end at Florida from 2000-2003, is a Swainsboro, Georgia-native who was recruited to Gainesville out of Butler High School in Augusta. He was named a first-team All-American as a senior after catching 39 passes for 638 yards, an average of 16.4 yards per reception, and five touchdowns. Additionally, Troupe was recognized as one of three finalists for the John Mackey Award, given to the nation’s top tight end. Troupe was ultimately selected 40th overall in the 2004 NFL Draft by the Tennessee Titans. His professional career extended five seasons, including stops with the Tampa Bay Buccaneers and Oakland Raiders.

Among other career highlights, Troupe’s game-winning 10-yard touchdown catch in the 2002 Florida-Georgia game stands as one of the most heralded moments in series history. With 11:45 to play in the fourth quarter, Rex Grossman connected with Troupe for the final score of the evening, a matchup the Gators won 20-13. Florida’s upset of the 5th-ranked Bulldogs had national implications as that loss proved to be Georgia’s only defeat of the year. Troupe, for his efforts, was inducted into the Florida-Georgia Hall of Fame in 2016.

The goal of the “Ben Troupe Florida-Georgia Legend Series” is to help preserve the past through the perspectives of former competitors, all for public viewing in an area that has long been a gameweek hub for fans and media alike.

“This is my history lesson for what this game was, is and will be,” Troupe explained. “The greatest level of appreciation for any athlete is to be honored and remembered for his or her accomplishments by other athletes. I’m honored to be able to share these wonderful stories with my peers and the fans and looking forward to making this event an annual tradition in coastal Georgia.”

Chandler, a former All-American and two-time first-team All-SEC kicker, finished his career ranked second in league history in scoring with 368 points. The long field goal of his career, a 54-yarder, came in Florida’s 34-23 win over Georgia in 2000. Chandler was selected in the fourth round of the 2004 NFL Draft by the San Francisco 49ers, also playing for the Carolina Panthers, Jacksonville Jaguars, St. Louis Rams, Washington Redskins and Cleveland Browns. Ewaldsen was a leading receiver for the Gators in 1966, playing in the Sugar Bowl and Orange Bowl his upperclassman seasons. Ewaldsen had 41 catches for 427 yards and three touchdowns as a senior, helping Steve Spurrier win the Heisman Trophy.

Anderson was part of a senior class that recorded the most wins in program history with 52. He won two SEC Championships, in 2002 and 2005, also playing in two Sugar Bowls, winning his first. Anderson compiled 128 total tackles, 30 quarterback pressures and 18 tackles for loss. A former starting quarterback at UGA in 1982 and 1983, Lastinger led the program to an SEC Championship his junior year. He, in addition to winning twice against Florida, scored the game-winning touchdown in a famed Cotton Bowl victory over Texas. Ending his career 5th on Georgia’s all-time sack list with 18, Mallard was selected in the 7th round of 2002 NFL Draft by the Indianapolis Colts, also playing with the Cleveland Browns, Miami Dolphins, Atlanta Falcons and Denver Broncos. Samuel, a former five-star recruit, played both offense and defense for the Bulldogs. His game-winning 4-yard touchdown run early in the fourth quarter against the Gators in 2011 is remembered as one of the iconic scores in recent series history.

The aforementioned players are part of an expanding guest list.

Fans are invited to attend the “Ben Troupe Florida-Georgia Legend Series”. After Troupe, B.J. Bennett and Kevin Thomas broadcast “Three & Out” live the afternoon of November 1st, the roundtable panel will take place on the outside back veranda of the Westin Jekyll Island. Following that discussion, where outside seating will be available, there will be an autograph and photo session along with media availability.

Located at 110 Ocean Way, the Westin Jekyll Island is a four-star hotel nestled beachside, conveniently next to prime shopping and dining. The Westin offers a unique mix of cutting-edge amenities with classic local charm. Enjoy intimate access to the area’s top attractions, including the Jekyll Island Convention Center, Driftwood Beach and more. For information or booking, call 912-635-4545.