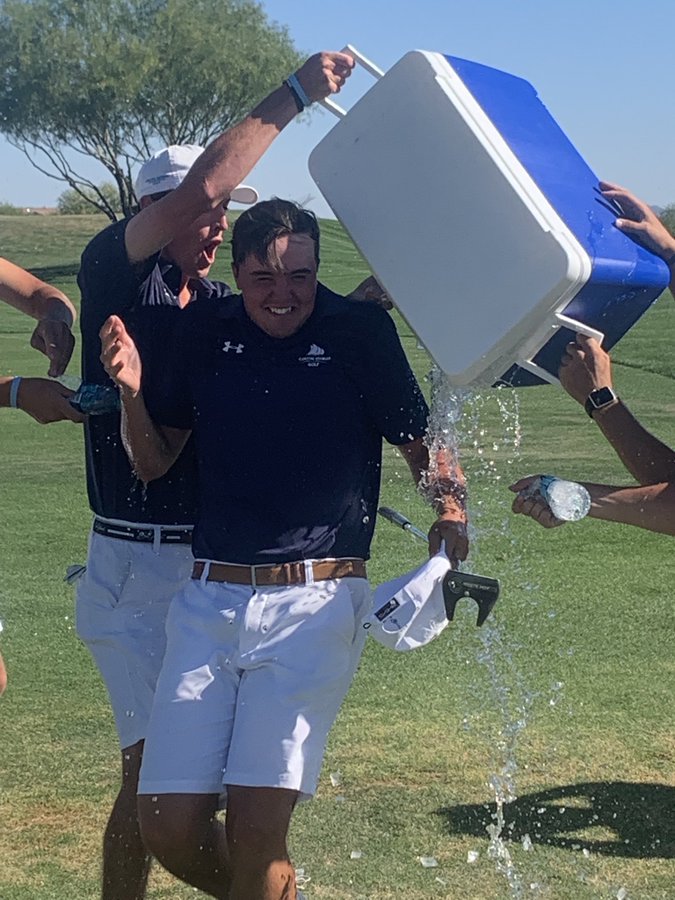 For Mark David Johnson, his process, regardless of stage or circumstance, has been the key to his success. Johnson, the individual winner at the NAIA Men’s National Championship at the Las Sendas Golf Club in Mesa, Arizona, won a three-person playoff to finish first for the College of Coastal Georgia, which recorded a second-place team result, on Friday. He edged Alec Dutkowski of Taylor University and Logan Carver from British Columbia to claim the individual title.

Johnson compiled rounds of 72, 74, 69 and 71 for a four-day regulation total of 286; the true value of those scores is that none of them shook his focus.

“I was super nervous coming down the stretch, but my mindset was to just try and stick to my routine and hit the ball with confidence,” Johnson explained.

Despite mounting pressure, Johnson, history on the line, promptly birdied the bonus hole to bring the national championship back home to Brunswick and the Golden Isles. Countless hours of practice, thousands of rounds where the only competitors were the heat and his mind, ultimately helped Johnson find his way. The destination, taking Johnson nearly all of the way across the continental United States, came with an ice bath and still-drying ink.

For a young program already ripe with considerable tradition, Johnson’s low medalist rally adds even more hardware to a gleaming College of Coastal Georgia trophy case. The Mariners, as a team, won the 2014 NAIA Men’s National Championship, with the men and women having both established themselves as contending powers. On multiple fronts, the reach of Coastal Georgia golf, nestled in one of the game’s most vibrant communities, continues to expand.

For Johnson, the grand finale stands as a fitting exclamation point for a storied career. A St. Simons Island-native, he starred at state fixture Glynn Academy, signing with NCAA Division I program Western Carolina as one of the top 375 prep players in the nation. There, Johnson emerged as one of the more competitive golfers in the Southern Conference, ranking in the top 15 in the league in scoring average as a sophomore and finishing fifth in the SoCon tournament as a freshman.

Johnson’s legacy, even before any professional pursuits, has lasting power. Long a standout amatuer and already an accomplished collegiate, Johnson ends his Coastal Georgia tenure ranked number one in the country.

A man of two names, Johnson now has another double title: national champion.

“The title means so much,” Johnson added. “To be able to go out my senior year at the biggest tournament with a win is great.”

Late in the biggest tournament of his life, the spotlight as bright as ever, Mark David Johnson found a way to remain himself. The way Johnson clinched his title was a reflection of a generation’s worth of work.